The early settlers of the American Colonies would not admit people with disabilities to the colonies because they believed such people would require financial and other support. Colonists enacted settlement laws that restricted the immigration of many people, including those with disabilities. Regardless of these laws, people were born with disabilities or sustained disabilities after they arrived; although a much smaller number of people survived birth defects or injuries compared with today’s modern medical care.

Throughout history, wars and returning injured soldiers have been a strong motivating factor in advancing more positive attitudes and better solutions, not only of soldiers with disabilities but of all people with disabilities.

Disability was beginning to be considered a medical issue to be treated by doctors and cured or to be avoided altogether by “exclusionary laws.” Up until about 1920, a primary means for dealing with people with disabilities was to place them in institutions. The institutions were segregated from regular society based on disability. Most were located in rural areas away from population centers and were set up for “cure.” 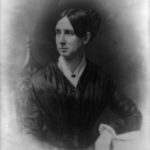 In 1841, Dorothea Dix began working on behalf of institutionalized people with disabilities. She found that “More than 9,000 idiots, epileptics, and insane in these United States are destitute of appropriate care and protection. Bound with galling chains, bowed beneath fetters and heavy iron balls, attached to drag chains, lacerated with ropes, scourged with rods, and terrified beneath storms of profane execrations and cruel blows; now subject to jibes, and scorn and torturing tricks, now abandoned to the most loathsome necessities or subject to the vilest and most outrageous violations.”

A short time later, President Abraham Lincoln authorized the Columbia Institution for the Deaf, Dumb, and Blind to confer college degrees, making it the first college in the world to be established for people with disabilities. 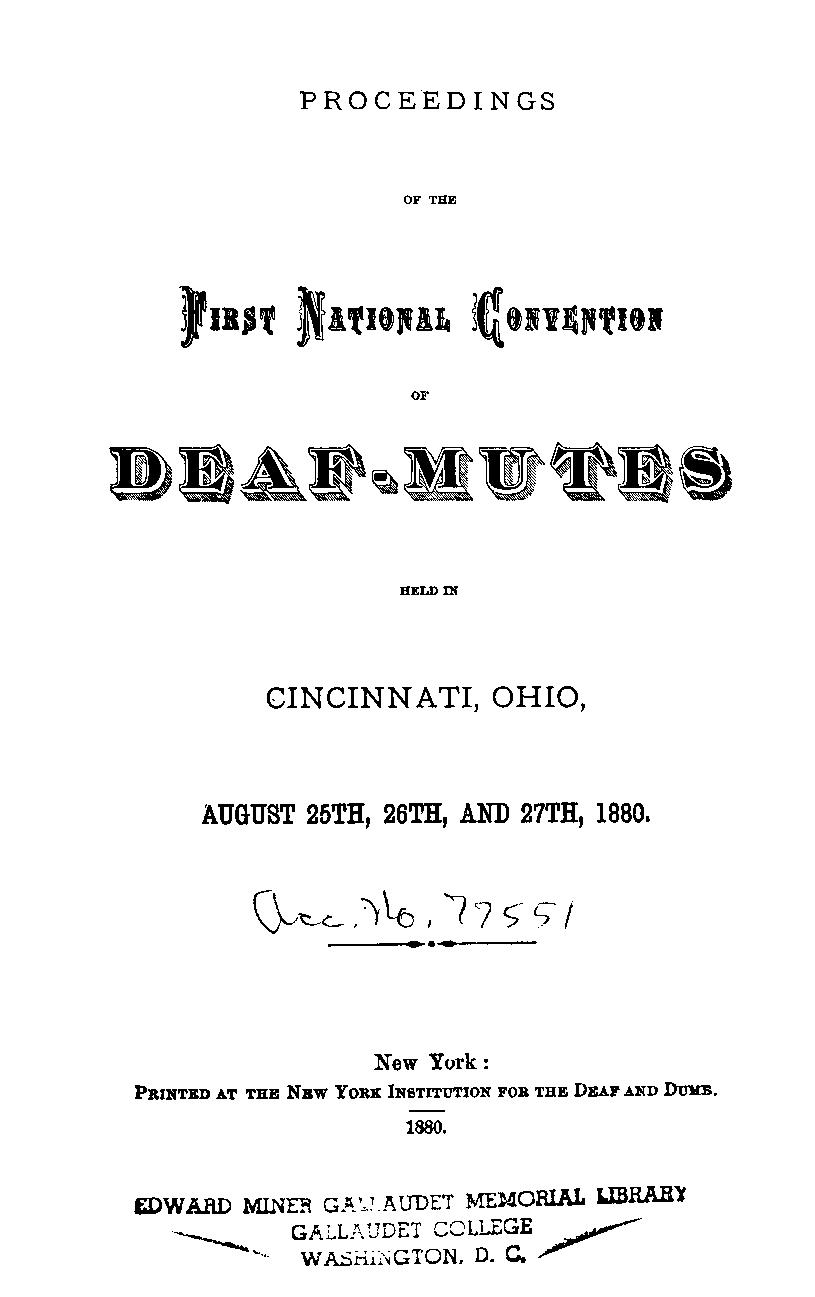 The National Convention of Deaf Mutes convened in Ohio in 1880 and the first order of business was to oppose the ongoing effort to suppress the use of sign language in favor of lip reading and “oralist” communication. People who were deaf expressed their desire to be able to communicate more accurately and rejected the effort to remove deaf teachers from education classes for those who are deaf.

Around 1842, the circus magnate and showman, P.T. Barnum, began displaying what he called “freaks” at a special museum in New York City. Essentially, his displays consisted of people with unusual physical features. This practice continued as circus side shows well into the 1900’s. He emphasized differences of those with disabilities in a way that worked against their acceptance and integration into society and certainly distorted perceptions of people with disabilities. 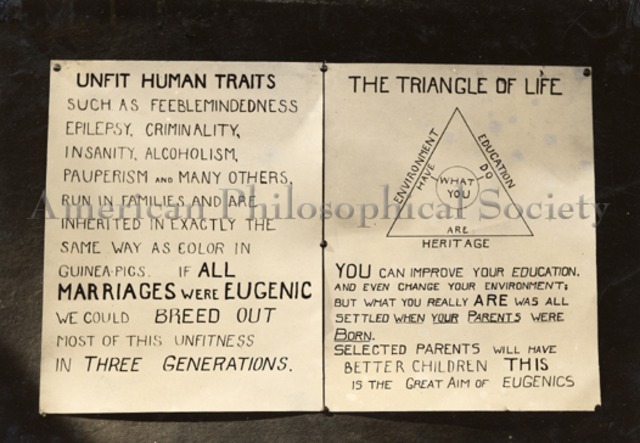 Toward the end of the 19th Century and during the first part of the 20th Century, a eugenics movement flourished that had an extremely destructive impact on public attitudes toward people with disabilities. Sir Francis Galton coined the term “eugenics” to describe his pseudo-science of improving humanity. The movement contended that people with disabilities should not be allowed to survive or reproduce because they would weaken the gene pool of the human race and cause all types of social problems and degeneracy.

The momentum of the eugenics movement led to the passage of laws to prevent people with disabilities from immigrating to this country, marrying, or having children. In many instances, it led to the institutionalization and sterilization of adults and children to protect the human race from degenerating into moral decay.

Scientists eventually disproved the basic tenets of the eugenics movement but not until after the forced sterilization of thousands of men, women, and children. It is estimated that 60,000 people were sterilized under state laws between the early 1900’s and the mid 1950’s following the Court’s ruling striking down Oklahoma’s Sterilization Law in 1942.

In 1918, the U.S. Congress passed the Smith-Hughes Veterans Vocational Rehabilitation Act creating a program to assist disabled vets to get jobs in the postwar era.

In 1920, the Smith-Fess Civilian Vocational Rehabilitation Act was passed to assist civilians with disabilities to become employed.

These two pieces of legislation were the forerunners of today’s Rehabilitation Act in which Title VII contains the provisions for Independent Living.

Organizations focusing around specific disabling conditions began to spring up. These organizations were of particular importance because for the first time there were organized efforts to raise money and disseminate information to support the interests of specific disability groups. 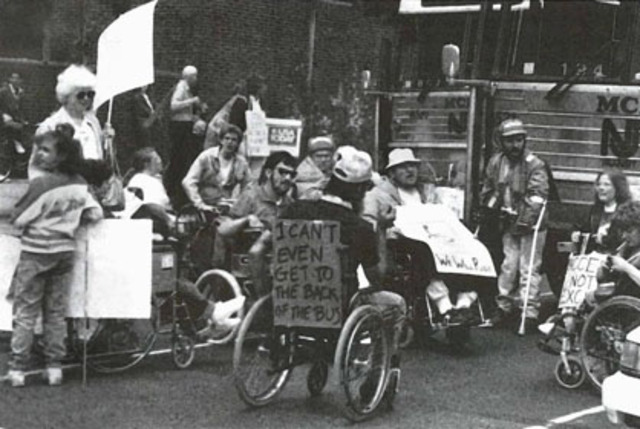 The beginnings for Independent Living were originally planted by war veterans who came home with disabilities. In addition, many more people survived accidents, disease, and birth impairments.

During the 1960’s and 1970’s, a solid philosophical and organizational base was laid for Independent Living. The movement and organized efforts to protect civil rights have further developed in the following decades.

Ed Roberts had polio at age 16, resulting in quadriplegia and the use of a wheelchair, ventilator, and iron lung. He struggled to be admitted to the University of California at Berkeley. First, he was denied financial help by the state Vocational Rehabilitation agency because they thought he was “not feasible for employment.” Roberts successfully fought this decision but then Berkeley 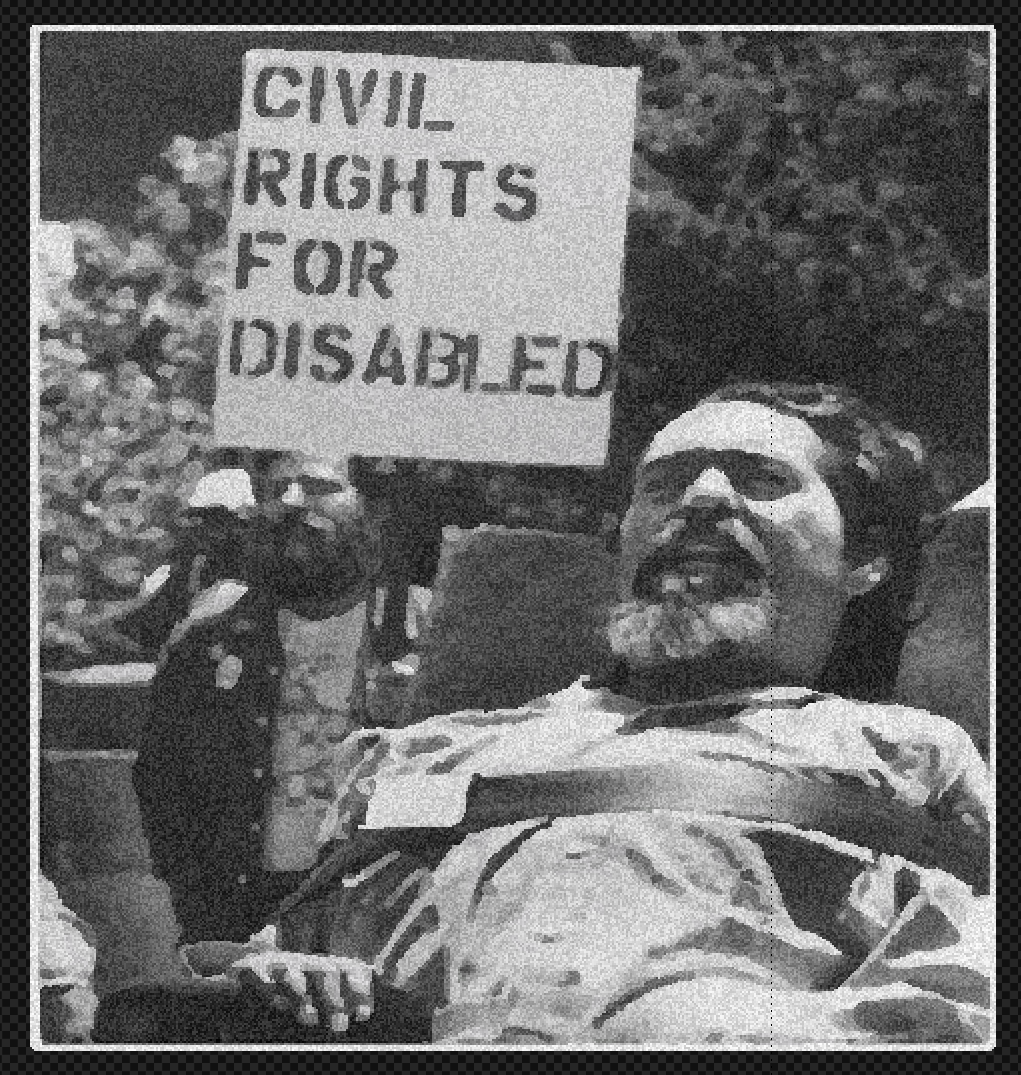 officials said that they had “admitted cripples before and it didn’t work out.” This is not surprising since accessibility was almost nonexistent. With persistence, he was finally admitted in 1962, and lived in the student infirmary.

As Roberts learned about what he needed to function successfully at Berkeley, he pressured University officials to make needed changes such as wheelchair repair, ramps, transportation, and accessible housing. They became known as the “Rolling Quads” and provided other students with assistance concerning disability-related issues. In 1975, Roberts was appointed by the California Governor to be the State Director of the Vocational Rehabilitation Agency, which just 14 years earlier had deemed him too disabled to work.

Judy Heumann is known as the Mother of Independent Living. She had polio as an infant, which resulted in quadriplegia. Upon graduating from college and passing all the required exams, Heumann applied for her teaching certificate. She was denied because officials determined that she would constitute a “fire hazard” in a school, the same reason given for keeping her out of regular school classes earlier. She organized a contingent of people with disabilities in New York City called Disabled in Action (DIA).

When President Nixon vetoed the new Rehabilitation Act passed by Congress in 1972, because he said it was too costly, DIA shut down traffic on Madison Avenue in New York with about 80 people with disabilities in protest. This legislation contained funding for Independent Living Centers and the very first provision to protect the civil rights of people with disabilities against discrimination. Section 504 states, “No otherwise qualified handicapped individual shall be excluded from participation in programs or activities receiving federal financial assistance.” 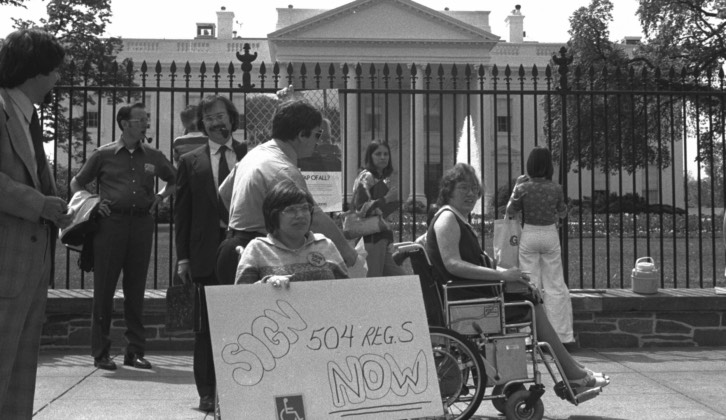 In 1973, Congress sent Nixon a bill with Section 504 but without the Independent Living provisions and funding, which he finally signed. When the required regulations had not been implemented by 1976, even after prodding by disability groups, it became clear that delay was being used as a means not to honor the law. In the meantime, Judy Heumann had joined Ed Roberts at the Berkeley Independent Living Center as the Deputy Director.

A cross-disability organization called the American Coalition of Citizens with Disabilities gave President Carter an ultimatum date for the Section 504 regulations. When the ultimatum date passed with no regulations, protests took place at ten regional Health, Education, and Welfare offices across the country. Most lasted a day, but under Heumann’s leadership in San Francisco, approximately 150 people with ALL types of disabilities and at great risk to their health stayed for 28 days and refused to leave until the regulations were signed. They left the building after 28 days of occupation, 2 days after the regulations were signed, having read and approved them.

In 1978, a reauthorization of the Rehabilitation Act contained provisions for Centers for Independent Living and $2 million was appropriated to fund 10 states around the country. 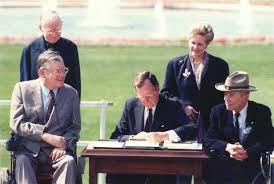 her very significant victory was the passage of the Americans with disabilities Act or ADA. After many revisions, the ADA was signed into law July 26, 1990 by President George H. W. Bush. At the signing of the ADA President Bush said Three weeks ago we celebrated our nation’s Independence Day. Today we’re here to rejoice in and celebrate another “independence day,” one that is long overdue. With today’s signing of the landmark Americans for Disabilities Act, every man, woman, and child with a disability can now pass through once-closed doors into a bright new era of equality, independence, and freedom. As I look around at all these joyous faces, I remember clearly how many years of dedicated commitment have gone into making this historic new civil rights act a reality. It’s been the work of a true coalition, a strong and inspiring coalition of people who have shared both a dream and a passionate determination to make that dream come true. It’s been a coalition in the finest spirit — a joining of Democrats and Republicans, of the legislative and the executive branches, of Federal and State agencies, of public officials and private citizens, of people with disabilities and without.”